What’s The Deal With Rakeback Anyway? 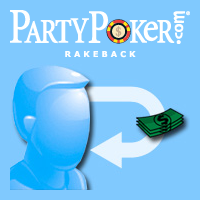 You may or may not be familiar with the concept of rakeback, but it’s a scheme where players get back part of the rake that they have paid to a poker site.  So if you are signed up for rakeback, your play is tracked, and you get reimbursed a percentage of the rake that you have paid.

Some poker sites have never offered rakeback, and therefore you don’t get anything back and have to bear the full cost of the rake.  This might not seem like a big deal, as you might be thinking we’re only talking small change here, which on average is only a nickel per dollar of the pot.  However, all these nickels add up to big money at the end of the month or year.

I know quite a few people who play poker for a living who make all of their money from rakeback.  They only break even or lose a bit of money at the games, but the money they get from rakeback is enough to make playing poker a worthwhile full time job.  Now these players play lots of tables at the same time and have pretty good sized bankrolls, so I’m not suggesting that you do this necessarily, but this should give you an idea of how big a deal this all is.

So Party Poker isn’t the only site that offers rakeback, however a lot don’t these days, and the trend is toward poker sites getting rid of rakeback and no longer allowing it.  As well, with the few major sites that still offer it, you have to go through an affiliate, and sign up for it specifically.  Once you’ve signed up at a poker site, if you didn’t go through one of these rakeback affiliates, you have missed out on getting it forever.

For instance, I’ve been playing online poker for over 10 years and have never seen a dime of rakeback from anywhere but Party Poker.  In fact it hasn’t been until very recently that I got anything from anyone, given that Party Poker’s rakeback scheme is fairly new.

Party Poker’s Rakeback Program Is The Best In The Industry

At the poker sites who do offer rakeback, once again, the majority of players there were left out, and Party Poker at the time was one of these sites.  So Party Poker decided that this system wasn’t fair at all and came up with their current rakeback program, opening the doors to it to everyone.

Now, you didn’t have to visit some rakeback broker’s link before you first visited a poker site, something very few players end up doing.  You also don’t have to have the broker take a cut of your rakeback amount as profit, or even worse, have to trust people you don’t even know to decide how much money you are entitled to.  Who really knows if you’re getting your full share, or if they are skimming even more off of it and putting it in their own pockets.

So for a number of reasons, some poker sites have taken control of the situation and now reward players directly through their loyalty programs.  However, other sites end up just throwing you crumbs here in comparison to what Party Poker does.  Active players in fact have been very disappointed with the programs of other poker sites who say they have come up with a better way, only to drastically cut what players have been accustomed to getting back.

So if you’ve been getting up to a quarter of your rake back, and now you only get a few percentage points, sure you aren’t going to be happy.  Party Poker always goes all out to make their players happy though, and in fact their scheme puts even more money in the pockets of their players, and you can get up to a whopping 50% back in your account depending on how active a player you are.

So as you can see, this is like a snowball, where the more it runs down the hill, the bigger it gets.  So play here gets rewarded more and more as it increases, which is a great reason in itself to make Party Poker your site of choice.

So as you play at Party Poker, you will achieve certain levels where you get paid out.  These payment levels are very generous in themselves, however Party Poker allows you to shoot for even more money, and players would be extremely wise to take advantage of this.

The only reason why you would want to just grab the cash now is if you really need it to continue on, for instance if your bankroll was pretty much down to nothing.  Given how soft the competition is at Party Poker though this isn’t likely to be the case anyway.  However, Party Poker does give you the option here, although in almost all circumstances you’d be much better off taking these points that you earned to hit the level and leveraging them into even more money.  This will require you to continue to play at Party Poker though, but that’s something you’ll be doing anyway.

Let me give you an example to show more clearly how this all works.  If you are at the Gold VIP level, which has some pretty modest requirements to achieve by the way, when you achieve 3000 Party Points you have the option of cashing them in for $120, or letting them ride and play on and end up getting $200 for them.

Now once again, to play on, you do need to continue to play and there is a requirement that you need to achieve in Party Points that will allow you to collect the $200 instead of the $120.  However, the great thing about this is that these points also count towards your next set of bonus money, for instance the 3000 if you choose to go after that again, or you can go for a higher amount the next time if you choose.

So this all cashes out to your being given the $200 without any other requirements other than you just keep playing at Party Poker, which you will want to do in any case.  To say this is the best reward program around is putting it mildly in fact, as it blows away anything else out there at other poker sites.

As you increase your play, and move up the stakes, things get more and more exciting.  Once you make it to the Palladium Elite level, you work yourself up to a whopping 50% rake back.  You might be wondering how much money we’re talking about here, and the answer would be that you’re not playing for $200 anymore, you’re now playing for $75,000 in cash.  That is simply amazing.

Less sophisticated players really don’t’ understand how much money that can be made from rakeback alone.  One of the secrets of a lot of online professionals is that you can make a very good living just from these bonuses, as you can see.  If it takes you a whole year to get this $75,000, well that’s a good annual wage right there, and some players collect this amount several times a year.  This isn’t even counting your profits at the poker table, although as you can see, you can make some real big money even if you’re not making any profit at all.

What I do want you to understand from all this though is the impact that such generous rewards can have on your ultimate results.  This isn’t just the case for the most frequent players, as it plays a big role in determining the amount of money you make over time regardless of how much or how little you play.

The most exciting thing about Party Poker’s new rakeback system is the stunning development of their not charging their players tournament fees at all.  This just isn’t rakeback, it just isn’t full rakeback, it’s not charging rake at all.  Party Poker is the only poker site ever who has even contemplated such an extreme move in favor of their players, and they haven’t just thought about doing it, they have actually done it.

I can’t tell you how huge this is if you are a tournament player, in terms of the profound effect that it has on your return on investment and your hourly rate.  Like rake at cash games, tournament fees eat up a lot of your pre-rake profits.

I know players who play sit and go’s for a living who just get a piece of this back, a quarter of it or so, and make a lot of money just breaking even on the tournaments and earning a very good living just off of the rewards they get for their play.  Getting the entire amount back, and even better, not having to pay it in the first place, mean that they will instantly earn four or five times what they were making before.  So will you.

I’ve played at Party Poker for years as well as at pretty much every other poker site of any meaningful size, meaning a poker site that has at least enough people to get a game going at your preferred stakes, and there’s been nothing even close to what Party Poker has stepped up and offered its players with this new reward program.  It’s not just about the generosity of Party Poker, it’s these unprecedented rewards in combination with how easy it is to beat the competition there.

To give you an idea about what I’m talking about, I know a lot of fellow online professionals who are very good players but they make very little at the table and rely on rakeback for a lot of their profits.  This is because they play at poker sites where the caliber of opponents are much stronger than what you see at Party Poker.  I prefer instead to beat the crap out of my opponents and make stacks of money from them, and then collect the reward money as simply a bonus on top of that.  That is because I want it all.  I know that you do too.